‘The Overton Window’ is a concept named after its originator Joseph Overton, a former member of the US based free-market Think Tank the Mackinac Centre for Public Policy.

It describes the acceptable parameters of public discourse within a particular society.

Overton contended that the viability of a public policy depended on its position within or outside of this spectrum. If the policy is deemed acceptable within the existing bookends of public discourse, then it is possible for a politician to propose it without devastating her/his political capital. 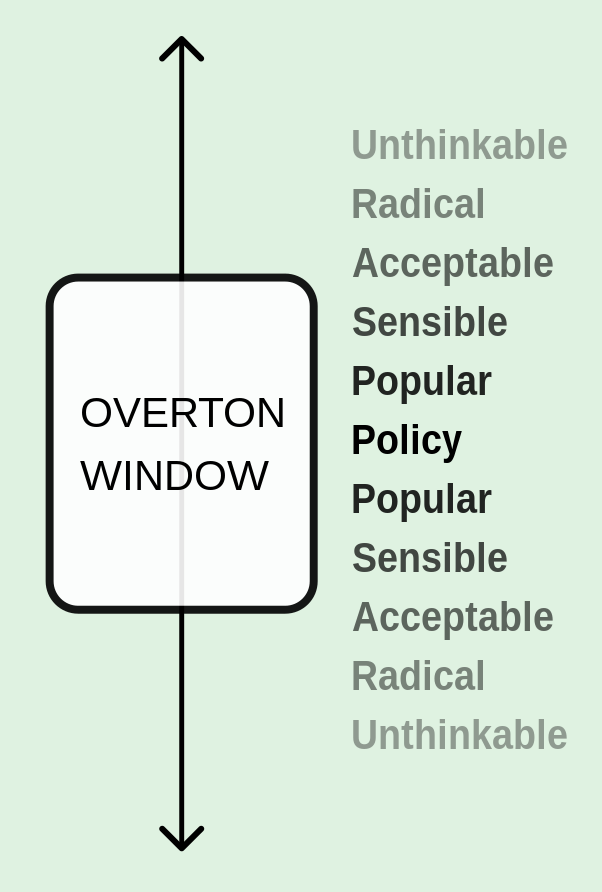 This may seem an obvious concept, but it is useful to consider The Overton Window in terms of ideological shifts.

When questioned as to her greatest political achievement Margaret Thatcher once stated “Tony  Blair  and  New  Labour.  We forced our opponents to change their minds.”

Shifting The Overton Window is a difficult and politically risky business, it involves stepping outside the mainstream, and taking a chance on underlying currents of public feeling.

But despite its political risks, radically altering the bookends of public debate can be an extremely powerful tool. Some of the most successful politicians throughout history have managed to make the politically impossible practically possible.

If we are to sufficiently address the most pressing issues of our day (Climate Change, Global Inequality.. etc), it seems imperative that our politicians seek to shift the currently ineffective width of The Overton Window.

2 thoughts on “The Overton Window”